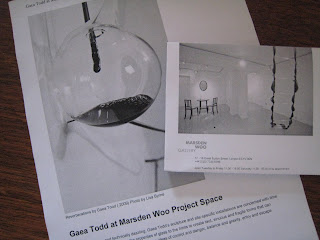 This exhibition of Gaea Todd’s glass work dealt with boundaries and transgression. She takes her inspiration from Mary Douglas and Julia Kristeva, so I found it particularly interesting. The pieces all included the movement of fluids, such as blood, milk, urine or tears, either literally or symbolically. I thought the piece that worked best was the two occasional chairs in the small installation of ‘In vino veritas’ with glass appearing to pour through the seat and onto the floor as if the occupants had melted and seeped through the seat to form a pool of bodily fluids on the floor. I felt the movement of actual fluids on the mirror in the same piece worked less well because the glass had obviously been applied to the mirror and did not seem to emanate from it.

The same criticism could be made of ‘Study 4’. The idea of the walls weeping blood (or in this case molasses) was brilliant but the glass did not seem to come out of the walls merely to be attached to them. I thought ‘Reverberations’ was much more effective with the glass rods sprouting out of the walls themselves and dripping blood. The rope ladder made of hair was also uncanny and the delicate glass rods containing ‘milk’ forming the rungs was very clever. They offered the tantalising promise of escape but reason told you they would be ineffective and splinter as soon as they were touched like a broken spell.
Posted by Carol Q at 08:26