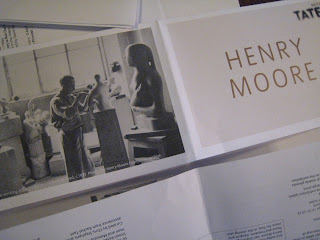 This exhibition at Tate Britain focused on the work of Henry Moore from the 1920s to the 1960s. It was arranged into themes: mother and child; Modernism; wartime; post war; and elm. It was especially interesting to see some of his sketches and pages of drawing clearly showing how he developed his ideas from original drawing to finished sculpture. I had not realised that during his Modernist period he had been interested in the uncanny. During the 1930s he seemed to have been working on ideas related to imprisonment, claustrophobia and anxiety perhaps induced by the zeitgeist in these pre war times. Many of his sculptures from this period incorporate strings and wire that trap and separate areas in a lace-like manner. In the 1950s he also produced several helmet sculptures with veils that seem to trap the wearer. Apparently there are also programmes about him on the BBC archive website.
Posted by Carol Q at 12:01