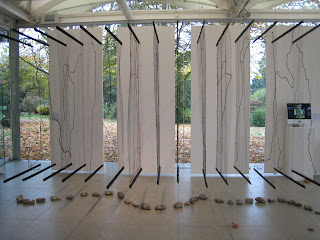 This colloquium at the Farnham UCA campus brought together the Transparent boundaries project participants and others working with ‘Elders’. Mary Schoeser spoke about the role of Elders in shaping contemporary textiles and brought a preview copy of her new book ‘Textiles: the art of mankind’ which is a sumptuous volume packed full of colour photographs of textiles; it is published next week. Fiona Davies explained the ideas behind her exhibition ‘Blood on Silk’ which is currently showing in the Hockey Gallery, Farnham (I’ll review it next week). The work is part of a series of installations produced as a response to her father’s last illness and exhibited in his local church in Aberdeen, Australia, and Lincoln College, Oxford, where he studied as a young man.
The European participants from the Transparent boundaries project then described their projects, details of which can be found on the website, but which are all linked by lacemaking. Gail Baxter and I are the lead artists for the UK pilot project, which is based on lace and mapping, and together with Dee Brien, the coordinator of the group we’ve been working with, we described how we produced ‘Tracks’ the lace installation currently being exhibited in the Foyer Gallery, Farnham (see my previous post Transparent boundaries: tracks). The day ended with Tony Docker telling us about an initiative for older people based on the Duke of Edinburgh scheme and, the artist, Bob White talking about the works produced by artists such as Goya, Titian and Rembrandt in their old age and how they differed from their earlier paintings. It was an interesting day that brought together many people interested in textiles and lace and their use in contemporary art.
Posted by Carol Q at 09:37