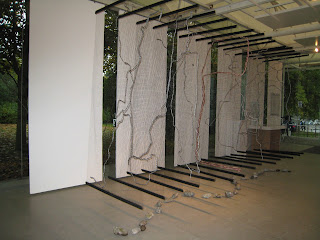 Tracks is an installation currently being exhibited in the Foyer Gallery, UCA, Farnham. It is the first part of a project Gail Baxter and I are involved in as part of the Transparent boundaries project. Transparent boundaries is an EU project including partners from the UK, Denmark, Greece and Italy, the aim of which is to increase the visibility of the Elder using lace networks. Gail and I are the lead artists for the UK and have been running a series of workshops with a group of Elders to produce this installation and other pieces which are being exhibited to coincide with the first conference linked to the project on Friday 26 October. All the members of the UK Elders group were asked to map their movements on one day in September and from this data simple line maps were generated that could be depicted by threading a silver thread through garden mesh to mimic filet lace. We have held several workshops with the Elders at which information has been shared and they have produced the ‘lace’. It has been quite a challenge to produce a lace installation that is visually interesting, inclusive of all the participants, and suitable for those who do not necessarily have any needlework skills. More projects, workshops and conferences are planned for the UK and the other EU partners and you can see more about the entire project on the Transparent boundaries website.