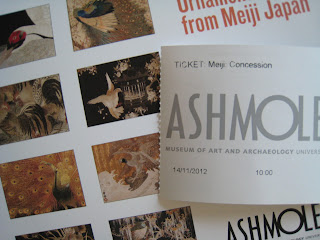 The full title of this exhibition at the Ashmolean Museum, Oxford, is ‘Threads of silk & gold: ornamental textiles from Meiji Japan’. On display are tapestries, embroideries and dyed panels produced during the Meiji era (1868-1912) in Japan mainly for foreign markets. In fact many of them were made for the world fairs held throughout the later nineteenth century to showcase the technical and artistic skills of Japanese textile makers. Interestingly the Japanese do not distinguish between fine art and craft, as we do in the West, but quickly adapted their techniques to produce panels that could be hung as fine art for the Western market. The dyed panels and tapestries in the exhibition are beautiful, but my favourites were the exquisite embroideries particularly those of the indigenous birds and flowers because the shading and stitching are so subtle. The embroidery of a fully displaying peacock on a four-panel screen is so detailed that each barb of the feathers is rendered individually. Often when images are rendered so accurately they become lifeless but here the detail makes the images appear more vital. One panel depicting a stormy sea with seagulls is so lifelike the waves appear to surge out of the fabric, while another of a hawk on a snowy pine branch is so realistic you can feel the cold of the snow. Also on display are panels of oshi-e, a technique I had not come across before, which is similar to stump work embroidery. It was often used to make plaques for shrines and incorporates three dimensional images of people, made by pasting silk fabric over padding to represent bodies and clothing and then painting the faces. It was very skilled work and highlighted the same amazing technical ability as that shown in all the textiles in this exhibition. In the end, the success of this exhibition lies in the combination of beautiful art and amazing technical skills; perhaps the Japanese are right not to distinguish between art and craft.