Printing and dyeing in Japan 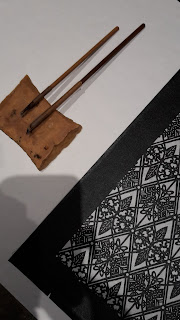 It’s always interesting seeing other people’s tools and working processes. We were lucky in Japan to see several master craftsmen at work and also to see their workshops and some of the behind-the-scenes work of other people in their ateliers. Most wouldn’t allow photography in the studio but we were able to see some of the tools in museums. The image above is of a stencil and cutters in the Hosoo Gallery Museum. These stencils are widely used in Japan and we were lucky enough to see them being used in the Edo Komon stencil printing process in Tokyo. As well as stencil printing we also saw resist fabric painting in Kanazawa, which was a similar process to silk painting with fine gradations of tone producing beautiful effects. 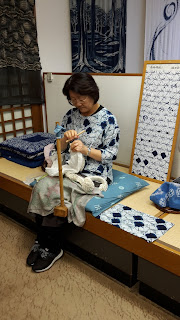 As well as printing and painting we also saw a variety of types of dyeing. The image shows a woman demonstrating the technique of arashi shibori in the tie dye museum at Arimatsu. There are two ways of doing this technique. She is using a fine hook to catch the material which she then softened in water to form a long tower which she twisted thread around. Her companion was doing basically the same process but didn’t use a hook just laid the fabric over an upright pin to push the farbic into a tower so she could wrap thread round it. Once the fabric has been dyed the threads are removed and a pattern of dots is revealed where the threads held the material. We then took part in a shibori workshop, luckily using a much easier technique. We folded a length of material into a triangular shape and then depending on which part of the triangle we dipped in the dye baths formed various star like patterns on our cloth. I think we’d still be there twisting threads if we’d used the arashi technique!