We saw some interesting variations on handmade buttons during our travels in India. The blue ones in the picture above were made from small circles of fabric. The material is then gathered round its edge, the centre is filled with scraps of fabric and then pulled up to form a ball. These ones are decorative and quite soft, but with a firmer centre they could be used as functional buttons. 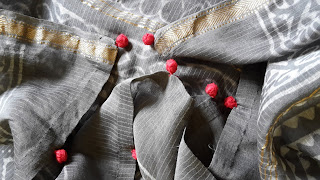 The other type of handmade buttons we saw were fashioned from simple wrapping. During a workshop at one of the women’s cooperatives we visited we were shown this technique for button making. Our teacher there produced a beautifully neat button by rolling a small amount of thread into a ball and then wrapping the remaining thread round and round the outside in a circular motion. She finished it off by passing the thread through the centre of the ball with a needle. The buttons in the image here were made using the same technique but less skilfully as they look a bit lumpy!