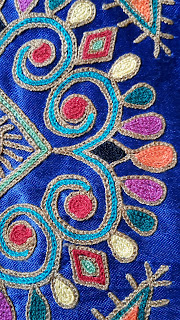 Chain stitch can be made using a needle, a hook or mechanically using the Cornely machine. Anne Morrell in her book on Indian embroidery suggests that chain stitch was probably introduced to west Gujarat from Baluchistan although there is also a theory that it was imported from China. Although chain stitch is seldom used in contemporary Chinese embroidery it has been found in textiles in ancient tombs. If you are embroidering chain stitch by hand it is quicker to do it using a hook rather than a needle and it results in a more regular line on the reverse of the work. The hook is similar to the ari (the shoemaker’s awl) used to embroider leather for footwear (see my blog of 25 March), although, because it is held differently, the handles of the two types of hook are different. 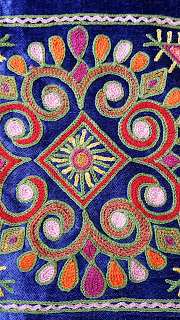 Embroidery with a hook is generally easier if the fabric is fixed taught in a frame. For needle work the fabric may be held in the hand or in a frame. Anne Morrell notes that when embroidering chain stitch using a needle, the worker generally stitches away from herself and this makes it easier to produce small even stitches. The two pieces shown here are variations on the same pattern produced as a sheet of square pieces approximately 10 cm in size, which are cut up to allow the purchaser to buy as many as they want.