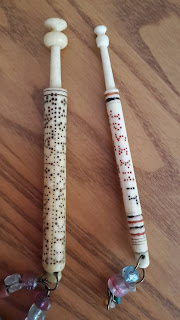 These two bobbins were clearly owned by young women who knew their own minds. One reads ‘Joseph is not for me know it’. Poor Joseph is being told quite publicly that his attentions are not wanted or reciprocated. In contrast, the other bobbin states that the owner has found her true love and is not interested in any other young men; it states ‘My hart is fixt I cannot rainge I like my chise to well to chang’ (My heart is fixed I cannot range, I like my choice too well to change).
This large bobbin (on the left) was probably made by Jesse Compton who lived from 1793 to 1857. He was a prolific lace bobbin maker and his speciality was inscribed bobbins and those decorated with pewter inlay. In general his inscriptions are made up of dots arranged in a spiral up the length of the bobbin but some of his larger bobbins have the inscription written horizontally, like this one. His spelling was not always accurate and on this bobbin the final word ‘chang’ is squeezed onto the line with no room for the final ‘e’. The bobbin could also have been made by his son James, who was also a lace bobbin maker, but I think it is Jesse’s work because his bobbins tend to have a bulbous head, like this one, and James’ lettering is neater than his father’s.
I think the second bobbin, on the right, was made by the maker the Springetts call ‘The blunt end man’ who was working in the mid nineteenth century. The name comes from the simple ends he gave his bobbins. His lace bobbins usually have bands of red or black round the top and tail and the same colours are used for the lettering. The messages are written horizontally along the bobbin and his lettering is quite distinctive. It would be nice to think that both bobbins were owned by the same lacemaker and formed a narrative but that is pure speculation!