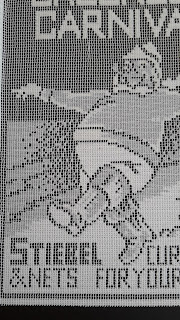 This little piece of curtain lace is only 15 cm wide and 20 cm in length and is an advertisement for Stiebel lace curtains. The lettering at the top shows that it was made for Skegness carnival and the fisherman going for a bracing walk was first used on a poster for the Great Northern Railway in 1908. I do not have a date for the lace panel, but it is made from synthetic fibres which did not come into use until the 1920s. The fisherman image was also reused by the London and North Eastern Railway in 1925 to promote travel to Skegness, so the lace may date from that period, when the image became more widely known. I think the lace was an advertising handout, much in the same way as one would hand out a flyer or leaflet. I’ve seen similar pieces of machine-made lace advertising Peach lace curtains, but they weren’t linked to any other event in the same way as this one, and I assumed they were intended to be placed in a display at a wholesale lace fair or in a shop window. The question is why would anyone be advertising lace curtains specifically in Skegness? Perhaps this carnival was a popular event that attracted a large audience of people who were likely to buy lace curtains. Skegness carnival still takes place annually and local businesses are encouraged to hire stalls and support the event so perhaps this is what the local haberdashery store was doing. Stiebel itself is a lace manufacturer based in Nottingham so is unlikely to have directly supported a carnival in the Lincolnshire town of Skegness, unless there was a large market for lace curtains in the area or the company had a special link to the town. If you know anything about any link or indeed anything more about curtain lace advertising do let me know as I’d be interested to find out more.