Lace curtains by Simon May and Co of Nottingham 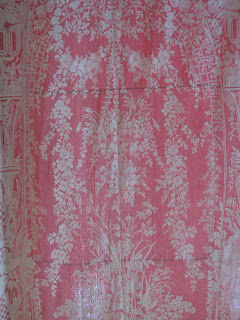 I’ve been reading the book produced by the Simon May lace company of Nottingham to celebrate their centenary in 1949, which is full of interesting information including a couple of pages about their lace curtain department. Apparently the lace curtain and curtain nets section was one of their original departments and they claim that ‘the present range of products and markets is probably as wide as it has ever been’. They certainly cover a wide range of curtain types including panels, allover designs, brise-bise, vitrages (a light curtain fabric), valance nets as well as tablecloths and bedspreads. They note that during ‘the recent war’ all curtain machines were turned over to producing sandfly nets for the troops. The two-page spread is illustrated with some prize winning curtains including one that won a special award at the Vienna exhibition of 1873 (a detail is shown in the image) and another depicting the story of Don Quixote, which won an award at the 1876 Philadelphia exhibition. I was lucky enough to see both of these prize-winning curtains in 2015 when they were loaned to the Nottingham exhibition ‘Lace in the City of Lace’ by Malcolm Baker.