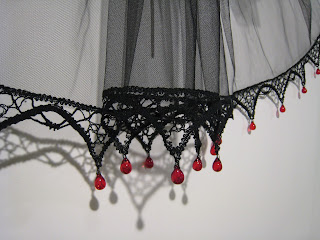 I made this series of black lace veils as part of a study into nineteenth century gothic literature. They are all made from a double layer of fine black net gathered from a bunch of artificial black flowers at the crown, which hides a hair comb that can be used to secure them to the head. The lace in the image above was inspired by Bram Stoker’s Dracula and incorporates fangs and drops of blood, which are a lovely glowing ruby red in candlelight. 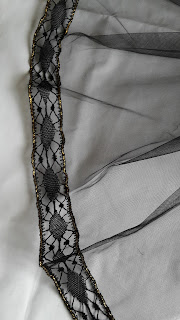 ‘Belladonna’ is another veil in the series, this time inspired by the idea of a mourning veil which could have been worn by a gothic heroine such as Lady Audley in Mary Elizabeth Braddon’s Lady Audley’s secret. The design of the lace trim is based on the leaves and berries of the poisonous deadly nightshade plant (Atropa belladonna) with a hint of gold suggesting that the widow’s state may not be wholly unexpected or unwanted. 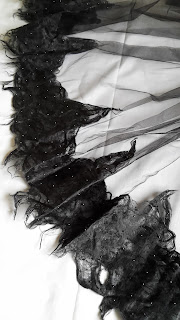 ‘Creeping dread’ doesn’t include any lace but instead has a trim of black silk paper and iridescent black beads like tiny insects that appear to be creeping up the veil and smothering it. The ‘Gothic veil’ includes some black lace but again it has been smothered by black silk paper that threatens to engulf it and the entire veil. These black veils, and a series of white ones also inspired by gothic literature, have been exhibited in several places including the Knitting and Stitching Show and the Living lace exhibition in Bruges.

This is exceptional work. The symbolism works beautifully and, for those of us who steep ourselves in literature, it is powerfully apt.
James Ember.