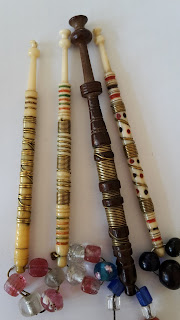 I thought writing about wired lace bobbins would be a simple task but I found it difficult to determine who had made these. I think the most likely candidate is one of the Haskin family, most probably David Haskin who was born in 1819 although they could be the work of his nephew Robert. As usual most of my information about identifying bobbin makers comes from the Springett’s book Success to the lace pillow. Their image of the typical head and tail of David Haskins bobbins was what finally confirmed my identification. Many of his bobbins were decorated with brass wire like these and the grooves always ran in a left handed spiral direction. His wooden bobbins often had a distinct collar like the one in the image although interestingly his bone bobbins did not and many of them are quite fine, narrow and delicate and would have been suitable for fine Bucks lace patterns that required a lot of bobbins on the pillow. It is remarkable that so many wire-bound bobbins still exist in their original state (although you can also find them with grooves and holes where wire would have been wound, but missing the wire) suggesting that the wire was well attached and secured into the holes drilled for the purpose. It just shows what excellent craftsmen the Haskin family were.
Posted by Carol Q at 09:46

The magic of the purpose of craft tools! The joy of exploring their history!
James Ember.