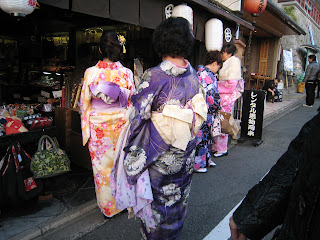 Having just been to Japan, I spent time in some of the department stores admiring the kimono and obi fabrics. I was also pleased to see so many women wearing the kimono on the streets and when visiting shrines and temples. I saw these three girls on the way to the Kiyomizudera Temple in Kyoto wearing their beautiful traditional kimono. I also saw some examples of the ‘sweet’ style of clothing, the photo below was taken in the Takeshita dori area of Tokyo. This style of overgrown girlishness seems slightly sinister to me though and reminiscent of Grayson Perry in his alter ego Claire. 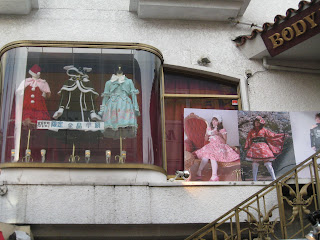 Visiting the V&A Japanese galleries last week revealed that there are even more styles of modern Japanese clothing. The exhibition there shows examples of the sweet, gothic and punk styles as well as the Japanese Lolita look. The latter differs from the others because it is based on traditional dress rather than on Western dress. Examples range from the demure kimono by Mamechiyo Modern to designs by Takuya Angel whose work is based on machismo and samurai armour. 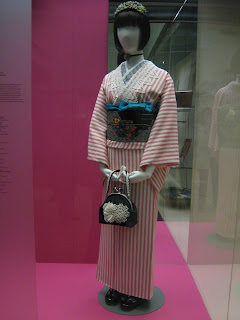 The photo above shows a demure kimono by Mamechiyo Modern in the V&A exhibition. Her aim according to the accompanying label is to make the kimono an affordable everyday form of clothing. She incorporates non-Japanese elements into her designs such as the headdress, choker and lace embellishments. As a Western viewer I think the traditional kimono is beautiful as it is and I can’t see the need to add foreign elements to it but perhaps if you have grown up with the traditional types you want something a bit different.