We Bury Our Own 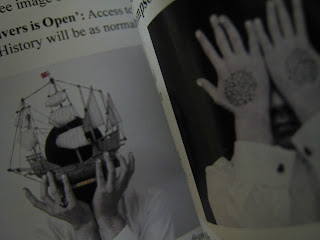 I was captivated by his methodology rather than the images he produces. In his artist’s statement he describes his process: ‘I lamented the passing of the flowers at the meadow, I lit candles and offered blood to the ancestral beings, looked into the black sparkling sea, donned the Oxford garb, visited the water by fire light and bowed at the knees of the old father ghost gum. I asked the photographs in the Pitt Rivers Museum to be catalysts and waited patiently to see what ideas and images would surface in the work.’

The photographs in the ethnographic archive have a direct and spiritual connection to the people depicted in them. Christian uses his art as a vehicle to deliver the spirit of the images back to the land through his self-portraits incorporating ideas about his transcultural identity. His work links to meditation and the votive. In some images he places crystals on his eyes to channel the spiritual world into the physical, and photographs himself in this way, in formal Oxford dress with the addition of flowers, butterflies, textiles or other artefacts. The resulting images appear strange and incongruous perhaps mirroring the very idea of ethnographic collections.