The Lost Prince: the life and death of Henry Stuart 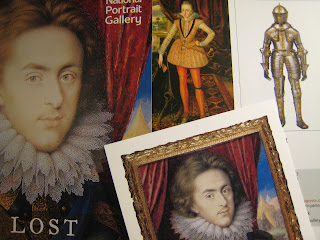 This exhibition at the National Portrait Gallery in London showed paintings, drawings, manuscripts, books, and armour reflecting the life and death of Prince Henry. He is mainly forgotten now, but at the time of his death, as an 18-year-old glamorous prince, there was a national outpouringof grief. He seems to have been an attractive character, interested in collecting art, as well as the usual male pursuits of the time such as hunting, riding and fighting and several of the portraits by Robert Peake the Elder show him in dynamic settings and poses such as hunting and on horseback. He was also interested in fine clothes and lace and the artists of the time, including the miniaturists Nicholas Hilliard and Isaac Oliver, depict these textiles in fine detail. I was particularly impressed by the depiction of the fringe on the cover over the horse in Robert Peake’s portrait of the Prince on horseback. Henry came to England as a boy of nine in 1603 shortly after his father James I inherited the throne on the death of Elizabeth I. His untimely death left his younger brother Charles as heir to the throne. After viewing the exhibition you were left wondering whether the charismatic Henry might have avoided the Civil War that erupted during the reign of Charles I with such unfortunate results for the country and, of course, the king himself.