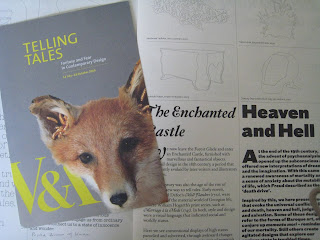 This symposium on 3 October at the Sackler Centre was linked to the current V&A exhibition Telling tales. The day opened with Professor Maria Nikolajeva talking about the traditions and history of fairy tales with reference to the links between stories around the globe and explained why fairy tales matter. She told us that myths are true but fairy tales are magic, unreal, entertaining and instructive. Catherine Hyde is an artist who has produced ethereal lustrations for many fairy tales. She spoke to us about her work and a recent commission she had been involved in producing illustrations for The princess’ blankets by Carol Ann Duffy. Emma Laws, based at the V&A, gave an illustrated talk about the collection of illustrated fairy tale books held by the V&A with many beautiful examples from Dulac and Rackham. In the afternoon Margaret Rustin, a child psychotherapist at the Tavistock Clinic, and Michael Rustin, Professor of Sociology at the University of East London spoke about the relevance of fairy tales and how he genders are portrayed in them. In the final panel discussion the speakers revealed that their favourite fairy tales were the snow queen and baba yaga.
Posted by Carol Q at 23:59