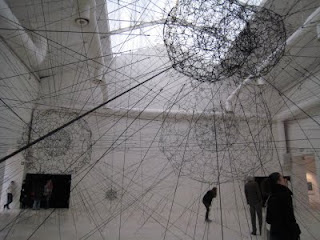 Tomas Saraceno’s ‘Galaxies forming along filaments like droplets along the strands of a spiders web’ hung in one of the main rooms at the Giardini pavilion. It filled the room and encouraged interaction as people clambered through its filaments and posed for photos through the fibres. I liked its lace-like qualities and the feeling that you could float through it. 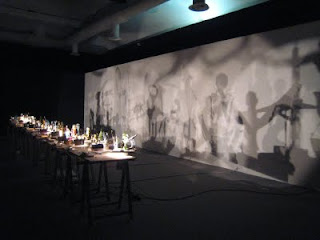 Hans-Peter Feldmann’s installation Shadow Play was one of my favourite pieces. I was attracted by its uncanny feel that ‘infused the ordinary with a sense of wonder’. The backlit objects on the turntables moved round forming almost abstract pattern of shifting shadows on the opposite wall; it was a very relaxing experience. The known items on the turntables were transformed and became unknown and slightly uncanny through their shadow images. One of the interesting things was that the tables, lights and objects on the turntables were not hidden and were very messy but you looked past them and concentrated on the shadows. 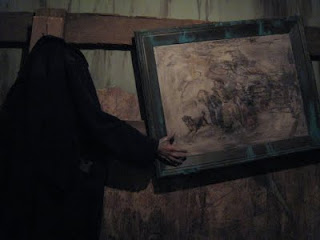 In the Russian pavilion I admired the work of Anatoly Shuravlev, whose small crystal balls hanging from the ceiling included tiny photos of figures that changes the course of history. I also enjoyed Gosha Ostretsov’s installation entitled ‘Art life of the torments of creation’. It was a small wooden house which interacted with the visitor as they moved round it; hands moved pictures on the wall and a mannequin made marks with a pencil on a desk. It appealed to me because I saw it as a haunted house from a fairground that included naïve mechanical movements. However, I later discovered it is a representation of the artist showing that his works will live on after him in a victory over the future.
Posted by Carol Q at 02:45