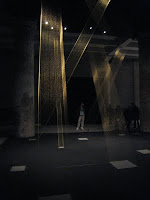 This was the first time I’d been to the Venice Biennale and I was impressed by the amount of art in the exhibition and throughout the city. We managed to see everything in the Arsenale and the Giardini in one day and spent the rest of the time visiting other venues.

This installation by Lygia Pape was the first thing we saw when we entered the Arsenale. It took a while to adjust to the dark, but the lines of threads glowing from the centre of the room gave it an ethereal quality. As you moved around the room and the threads were presented at different angles to the light they appeared and disappeared giving a magical feel to the whole piece. The ambience was slightly upset by the continual flash of cameras as the public took photos of it. 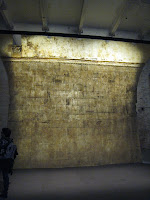 Jorge Otero-Pailos’ ‘Ethics of dust’ was made up of sheets of latex used to clean a wall during the restoration of the Doge’s Palace, during which ‘the translucent material became an index of the site’s past’. From a distance the piece appeared to be a textile and it was only when you read the caption you realised what it was.
Posted by Carol Q at 02:38